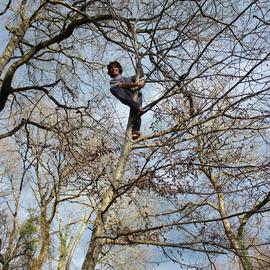 Parisian, born and raised! Curiosity drove my whole life, and led me to the wonderful labs of Daniel Margulies and Sean Froudist-Walsh - my two PhD supervisors and mentors - where I study the emergence of conscious access from the cortex topological architecture. My passion for mathematics and computer science gave me a computational angle.
I spend most of my time simulating global dynamics within whole cortex models and chilling on the river banks or rooftops of beautiful Paris.

I’m deeply into scientific discussions, especially with people I don’t agree with. This is, I guess, one of the reason that led me to the MESEC adventure, a series of international Workshops and WinterSchools that I organize with friends from all around the globe, under the sun of the Mediterrean see. A connectome-based model of conscious access in monkey cortex

A growing body of evidence suggests that conscious perception of a sensory stimulus triggers an all-or-none activity across multiple cortical areas, a phenomenon called ‘ignition’. In contrast, the same stimulus, when undetected, induces only transient activity. In this work, we report a large-scale model of the macaque cortex based on recently quantified structural connectome data. We use this model to simulate a detection task, and demonstrate how a dynamical bifurcation mechanism produces ignition-like events in the model network. Within this framework, the model predicts that feedforward excitatory transmission is primarily mediated by the fast AMPA receptors to ensure rapid signal propagation from sensory to associative areas. In contrast, a large fraction of the inter-areal feedback projections and local recurrent excitation depend on the slow NMDA receptors, to ensure ignition of distributed frontoparietal activity. Our model predicts, counterintuitively, that fast-responding sensory areas contain a higher ratio of NMDA to AMPA receptors compared to association cortical areas that show slow, sustained activity. We validate this prediction using in-vitro receptor autoradiography data. Finally, we show how this model can account for various behavioral and physiological effects linked to consciousness. Together, these findings clarify the neurophysiological mechanisms of conscious access in the primate cortex and support the concept that gradients of receptor densities along the cortical hierarchy contribute to distributed cognitive functions.